To empower youths (Scouts) by providing them with the opportunity to develop their musical talents while fostering self-initiative, encouraging teamwork and allowing for individual creativity.

The 1st Hamrun Group was established in 1913. At that time, most of the army regiments that were stationed in Malta, had their own bands. It was on these models that the Hamrun Group formed its own band. The band was started with a bugle, which was joined by drums some time later. Fifes were also introduced and thus it became a Fife and Drum Band although bugles also remained present in the band. The band was also shaped very similar to a military brass band for some time. In time, Bagpipes became popular in Malta mainly due to two Highland Regiments stationed in our country. Our group leader at that time, Mr. Joe Borg, saw the potential of this instrument and introduced it to the band, thus changing it to a Pipe Band in 1964. Initially, four bagpipes were purchased and were played by A.S.M. V. Tedesco, R.S. C.Giacomotto, R.S. D.Bugeja, C.M. G.Cilia. The pipes were so much at heart that they were even named: Totem Pole, A.A.R.D. Wolf, Gillwell and Baden Powell. 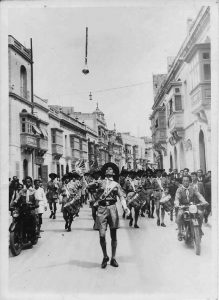 Four years later, in 1968, the Hamrun Scout Group was honoured with the Coat of Arms of the Duke of Argyll presented to us by the Duke himself. From that day on, with the approval of the Scout Association of Malta, our group became the 1st Hamrun Scout Group Duke of Argyll’s Own. This was an honour to our group especially to our Pipe Band which could wear the tartan belonging to the Campbell Clan from that day on.

Along the years, numerous other bagpipes where purchased along with brand new high tension snare drums, two bell lyres and three tenor drums. The latest addition to the band is a set of twelve Viscount silver plated bugles purchased from All Arms Marketing and Manufacturing Organisation – AMMO & Company ltd in 2014 to replace the older brass bugles.

The Pipe Band currently consists of close to forty committed individuals coming from different walks of life who, despite their differences, come together to perform as one. Under the direction of Band Leader Clive Saliba, the Band meets for weekly practice and section tuition sessions. When called upon, the Pipe Band takes part in parades with the 1st Hamrun Scout Group as well as on its own, representing the same Scout Group.